I have two doggies, Max and Pazzo and they are like my kids.  I think of them as my two little boys! But really one is an old man and one is middle aged.  Max is a Yorkie and reminds me of George Clooney if he were a dog, with his salt and pepper hair, and the way he walks, like he should have a cowboy hat on or something.  Someone the other day described Max's walk as "if he just got off a horse."  But Max has had a problem lately.  A big problem.  GAS.  Lethal smelling toxic gas, that is worst at night when his butt is sleeping right near my face! It's enough to make your eyes water, seriously.  The smell is like something died in his stomach and made a home there.  It's only been the past few months, and I suspect it's because he is getting old.  He is 14.  He is having gas right now, and it could almost make me pass out, and I have a really bad sense of smell, so for a normal person he would clear you out of the room! And he is just laying there like nothing is wrong and it's not him.  Pazzo does not have gas yet, thankfully.  He is just a lovably furry little teddy bear of a creature that everyone loves so much.  He's overweight, but that is his only problem....Max has a few others besides the gas, but we still love him. 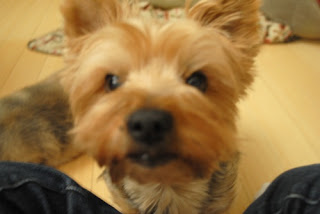