I'm really funny when it comes to potatoes, I only really like them at certain times.  For example I pretty much only eat mashed potatoes if I make a whole chicken, but even then I would rather have rice.  I eat rice almost everyday.  I'll only have a baked potato once in a blue moon.  And generally I never eat french fries unless they are really really good.  I'm just odd what can I say.  But the times I do eat potatoes I really do enjoy them, and I make homemade gnocchi several times a year.... So I saw this nice package of fingerling potatoes at Whole Foods and they say in my fridge for like a week before they almost got tossed.  I didn't really know what to do with them.  One night on a whim I was crunched for time and dinner had to be ready quickly, so I cut them up thin, tossed some salt, pepper, really good olive oil on them and baked them.  And I've made these about 10 times since! They are like homemade potato chips, but can be a little thicker depending on how you cut them, and I dip them in ketchup.  My eating partner is obsessed with them and asks me to make them all the time!

First slice up the potatoes (don't peel them) really quite thin, unless you want them less crispy, then slice them thicker.  Spread them out in one layer on a baking sheet (they must be one layer) and drizzle all of them with olive oil, cover them all with salt and pepper (for a nice variation I use truffle sea salt sometimes) and really you could put whatever spices you want on them if you want to flavor them, but I keep them simple.  Cook them for 15-20 minutes at 400 degrees.  Keep an eye on them while they cook and you can sort of flip them and move them around if you want to, but I really don't.  I like them crispy though so I don't really need to watch them closely. 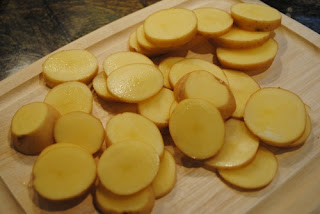 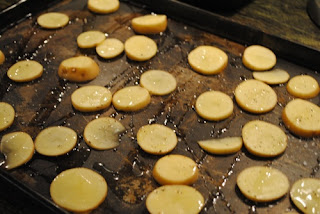 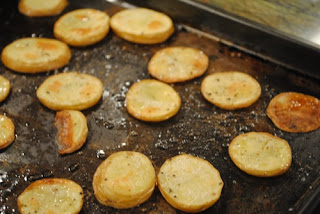