I've never really been INTO chowder before when winter comes and I start making cream of BLANK soups like a mad person, but this year I am! I really love clam chowder but I don't think it's one of those soups you can have all the time...that's just me! But I think maybe corn chowder you can.

You will need: about 4 strips of bacon, a few table spoons of butter, a small onion, thyme, two potatoes, 1 cup of corn, 1 cup of cream, 3 cups of chicken broth


First cut up the bacon into tiny pieces and cook all the way through in your pot.  This can take a while for it to cook thouroughly.  Then add your chopped up onion (I used a sweet one) with two tablespoons of butter a few springs of thyme and a sprinkle of cumin.  Let that cook for about 8 minutes, while you chop up your peeled potatoes into little cubes.  Then add 3 cups of chicken broth with your potatoes and your corn (I used frozen corn that was already cooked when I added it) and let cook until potatoes are soft, and then add 1 cup of cream and salt and pepper to taste and I add a bit more butter.

Feel free to add your own spices that you may want, the original recipe has a red pepper in it and some spices that I omitted because I just don't like them. 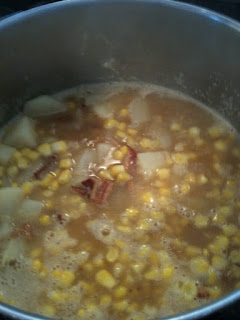 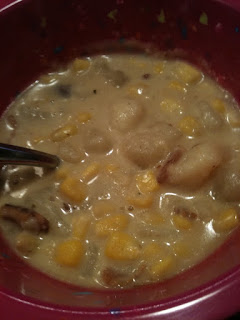 *This can very easily be turned into clam chowder by adding clams, clam broth instead of chicken broth and two bay leaves
Posted by natasha at 4:12 PM