After spending a few hours at Ikea, there is nothing more that I want than a nice burger.  (I love burgers) And I've been wanting to go to a MET Restaurant for awhile.  I mean I go by two of them a lot and I just have never been before.  But I knew there was one in Dedham on our way home so I persuaded my shopping partner to stop.  I think they are really known for their burgers.  I follow them on Twitter though and I they also seem to have a good lobster deal and a tacos and chicken special.  But I was fixed on the burger menu.  You pick your meat, size, toppings, etc to create your own burger, unless you choose one of their special burgers already made.  I was torn I have to tell you, I kind of wanted to have a burger with avacado and a fried egg on it.  And I kind of wanted to have one with swiss and mushrooms.  I should have gotten mini burgers and had both of these, but I went with something I would usually order and had cheddar and mushrooms on two mini burgers.  (Remember I love mini!) And my friend is on a new all natural diet sort of thing, so she had a huge giant cobb salad with shrimp. 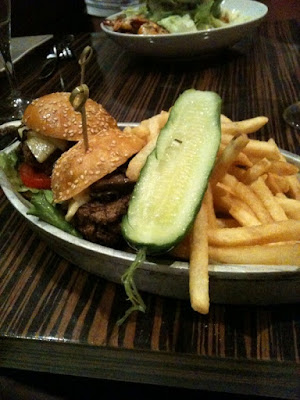 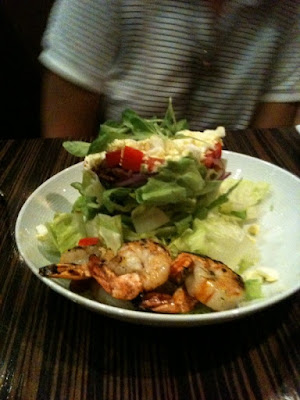 I loved the presentation of the burger.  And they were really good.  They were cooked really perfectly, and the bun had a little sweetness to it.  I don't really like french fries so I can't give you a real review of these, but when I do like french fries I like the shoe string crispy kind.  My friend ate her entire salad and I stole a shrimp which was really good and fresh tasting.  The presentation of the salad was nice too, I liked how they stacked it.  The service was really good.  And the restaurant was nice.  A little fancier than I think I would have thought.  But probably what you envision an upscale burger place to be like: leather & dark.

I'll be back.  Maybe next time for lobsters.
Posted by natasha at 7:41 AM