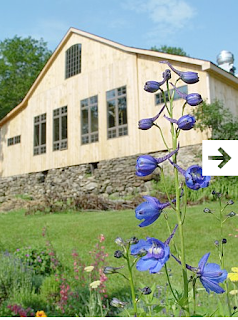 I grew up in the Northeast corner of Connecticut.  As a kid I really hated it and thought it was so boring (aka so rural) but now it's like a little gem of an area to me.  There are great restaurants, great little shops and so on.  I have heard about this restaurant for a long time that I am going to tell you about, and in fact it's been around long enough that I know my mom (who was a successful restauranter herself) went there when it first opened.  It's a farm to table restaurant - in the sense that they grow their own stuff.  I don't think they have any animals though. Still River Cafe is a rehabed barn, which I think is exactly who I am as a person - a rehabed barn, haha! I really loved the space.  It is located in Eastford, CT. 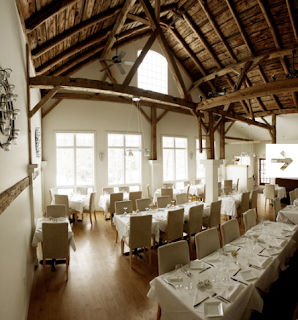 I was really really excited about this dining experience, because I am learning to really love fresh food, or "real" food as they say.  I really got into this mind set when I went to Italy three years ago and they didn't eat anything processed there, it blew me away and after being there for three weeks my entire body felt better, it was unreal. But anyway I was really looking forward to eating vegetables that had been grown right in their yard.  I had real trouble deciding what I was going to eat because there were so many things I wanted! The table was started off with a trio of things to taste.  We had pea soup, which was the most pea tasting soup I've ever had.  This is not your grandmother's pea soup.  It was fresh and light and the flavor really hit you like a ton of bricks!  We also had a carrot marshmallow, which only had a tiny hint of carrot taste, it was intersting, and a miso ravioli which is the weirdest thing I've ever put in my mouth.  I come from the school of taste when cooking, but I know some cultures come from the school of texture when cooking, and that is where this falls.  It was a little tiny bit of miso encased in this thin layer or something, when it went in your mouth it popped and the miso came flowing out.  Bizarre really! 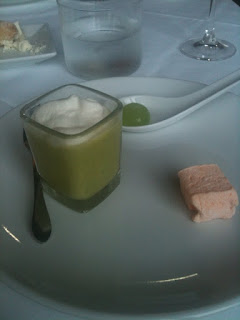 I started off with the gnocchi. It was really yummy, a little on the heavy side, it could have used a little less cream fraiche but the brown sauce was lovely. 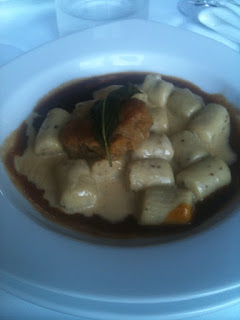 House Made Gnocchi
House made gnocchi, polenta encrusted sweetbreads, porcini cream fraiche and crispy sage leaves 14
As my entree I got lobster.  I was really torn between lobster and duck, two of my favorites! But I figured I can come back for duck in the fall! All of the entrees come done in three various forms.  I had lobster bisque, a lobster tail, and a lobster croquette.  I was excited about the lobster tail because it was done in leeks, and I really love leeks and they are so underused!   The lobster bisque was to die for.  It had am amazing hearty flavor to it.  I wanted to lick the bowl.  The lobster tail was really great with the leeks and the beats, and just had a very fresh flavor to it.  The flavor of the lobster just really came through.  I wasn't crazy about the croquette - it just lacked flavor I think especially next to the bisque and the tail, but I did eat it. 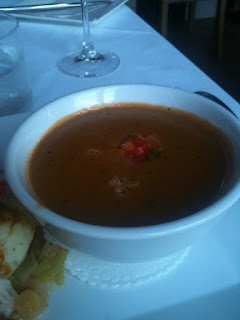 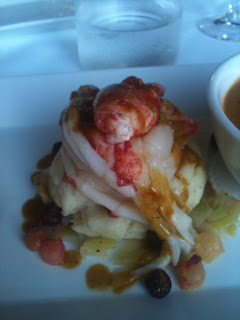 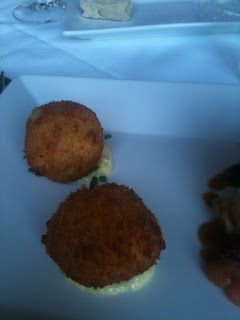 Maine Lobster
Lightly smoked lobster tail with caramelized leeks and Parisienne beets, lobster bisque and lobster croquette 34
Other guests at my table had scallops, which were fresh and lovely.   I stole one of this plate.  The ceviche was exactly what you want ceviche to be, and the whole scallops were perfectly cooked. 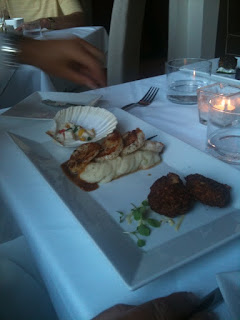 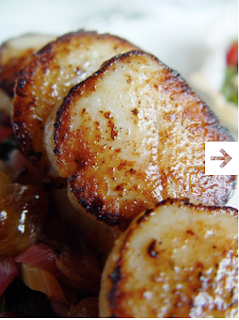 Tasting of Scallops
Pan seared Nantucket scallops with farm onions and scallop jus, scallop ceviche and almond encrusted scallop 34
We all got dessert too.  I was torn between creme brulee because it was tea flavored! And the "coffee and doughnuts" dessert I ended up with.  The table agreed mine was the best.  The donut was a little salty which I loved, it brought out the chocolate flavor so well. 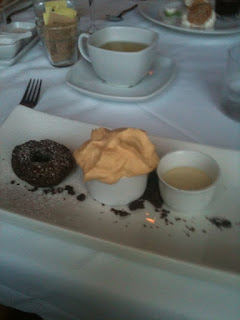 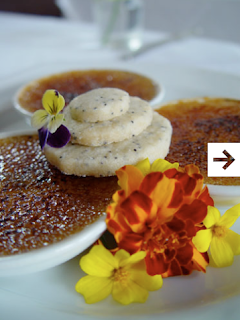 SRC “Evening Tea” Crème Brulee
Earl Grey crème brulee and lemon and honey crème brulee, lemon-poppyseed madeleine cookie 9
Overall I really loved my dining experience here.  Some of the desserts fell flat, but the meals were really the shining star.  And the ambiance I found really charming and lovely.  I can't wait to go back in the fall when their menu will change with the seasons.